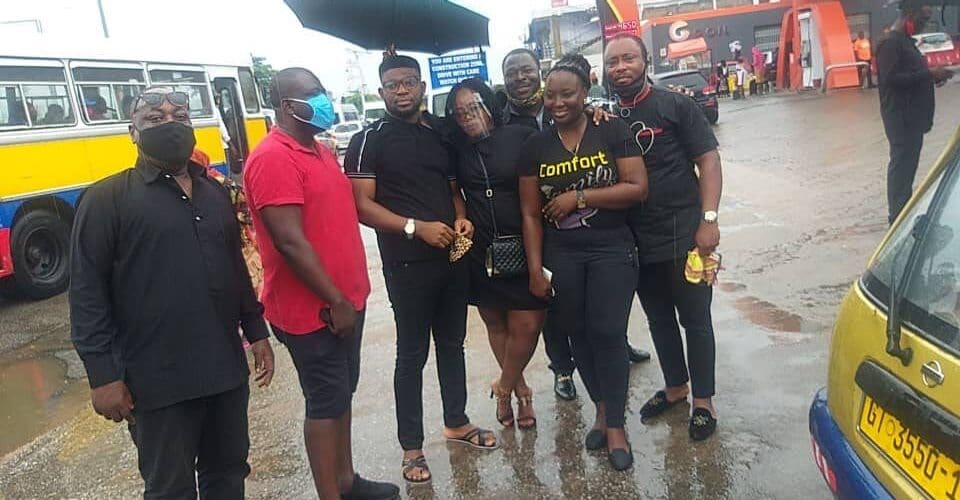 After serving the entertainment industry for so many years in his life, DJ Amess who passed some weeks ago is being buried today and there is something unique about his coffin donated by Onua 95.1 FM according to information we are picking from some close quarters. Amess Kotey aka DJ Amess served the industry as a panel member to various entertainment programmes on TV and on radio. His main claim to fame was being the manager of Castro for several years with a successful track record.

Though he was not an official staff at Onua 95.1FM owned by Media General, he served the station more than any other as he was always with their entertainment wing helping in production and punditry as well. Today being his funeral and burial day coupled with the heavy down pour in Accra that symbolizes blessings according to some people, www.sammyflextv.com has chanced on the coffin which will be used to bury him.

According to a staff member at Onua FM, the station bought the coffin to support the family and again to say thank you to him for his immense support he gave to them whilst alive. The coffin is a microphone piece which is a way to depict the industry he worked for as an artiste manager and a broadcaster. The two trades have a common denominator which is the microphone and that has been beautifully done to carry him to his next destination.

This is obviously a beautiful and a kind gesture to the Media Genera outfit to support those who are spending their quality time in making their station what is it today. It will encourage friends and allies of the outfit to serve them wholeheartedly in the near future knowing the station can come in for you when you need them.

May his gentle soul rest in perfect peace!!!

See a photo of the coffin below.