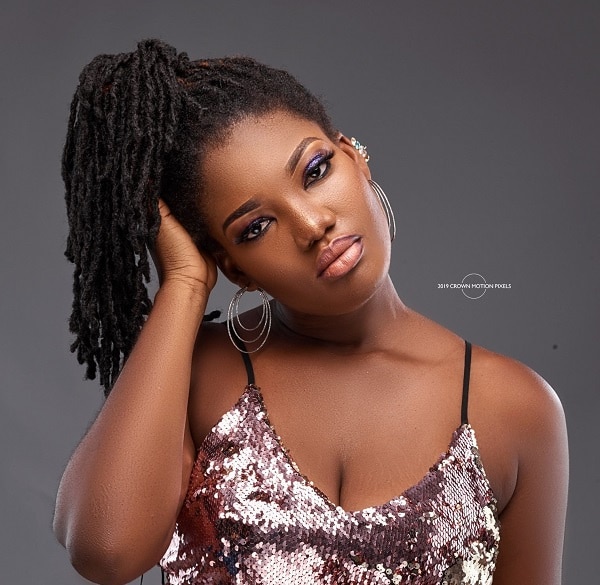 Ghana’s Fast-Rising Singer Iona Reine has vehemently debunked claims that she is a lesbian partner to her adopted mom and musician Mzbel, saying she can never be lesbian because she loves d!ck.

“I am touchy and that’s why some people think I am a lesbian. Sometimes you see me put my head on Mzbel’s breast and people think we are lesbians but she is my mom and there’s nothing wrong with that. I can never be a lesbian because I really love dick. I am a dick queen so I cannot be a lesbian. No disrespect to lesbians but I am not” she explained on Showbiz Daily on Wednesday night.

Speaking to Sammy Flex and his panel members on the show, she revealed Mzbel is her adopted mom from childhood and only loves to support her music. “Mzbel is my adopted mom and the support she is giving me is more than just financial support. She has been the plug for me getting access to some platforms” she said.

According to her, she believes being in Mzbel’s social media feud videos is not going to affect her or make any right thinking person hate her. She said it has really increased her numbers on social media and all that. Iona disclosed the whole incident that happened recently has been a plus for her mom Mzbel because it has changed people’s wrong perception about her.

The singer who is currently an independent artiste is promoting two singles “Obra” and “Sormeha” from her yet to be released EP. Her song “Obra” has proven the versatility of Iona. “I can fit into any genre because I am versatile. But people tell me they love me when I sing so I have many singing songs” she stated.

She also touched on why she has decided to go independent: “The reason why I am going indie is because I see that artistes have certain vision that usually the people around you don’t see or understand. That’s what I have realized. It is you the artiste alone who feels that passion or fire till the thing start picking up. So sometimes a record label might mean well for you, but you may be thinking you are going too slow so you end up doing something that will offend your record label. But with time, when you come up, they get to understand the vision better and everything works perfectly. I can only work with an investor as a business partner now and not when the investor wants to take decisions alone”.

She revealed she used to see the late Ebony in her dreams but after some spiritual directions and prayers, it has stopped but she misses her sometimes even though she never knew her personally.

When asked what exactly she thinks is the challenge for female artistes in the music industry, Iona responded saying it depends on the kind of brand you carry as an individual. “You know for somebody like me, I have this sex appeal thing. First I didn’t want to accept it but I realized that once lots of people keep saying the same thing to me, then I have to accept it. They feel I want to be sexy but I feel that is me naturally. I don’t have to pretend I’m sexy. It`s natural, effortless. But yeah depending on your brand, you may receive a lot of sex offers from men. They see you and the first thing they think about is sex. Personally, I don’t sing sex. It`s more of love but may be it`s because of the way I am” she noted.