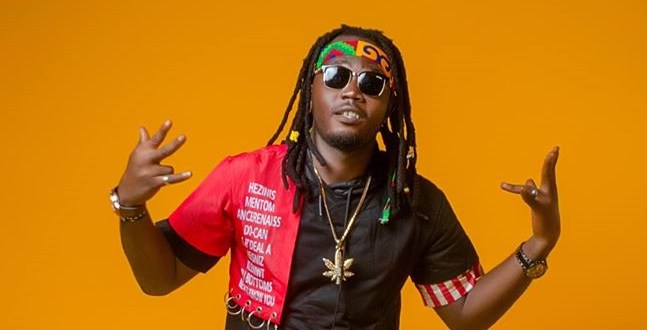 Hunter productions signee Kahpun has explained why he did not mention Shatta Wale and Jupitar as his favourite dancehall artistes in Ghana.

“I did not say my seniors are sleeping dogs. We have to know this is showbiz and certain words are not supposed to be taken personal. The whole issue was when I was asked to give my top dancehall artistes and I mentioned myself, Stonebwoy, Samini and Black Prophet. I did not mention Shatta Wale and the presenter was like what about Jupitar, what about Epixode and I was like they’re sleeping dogs. And if I say they’re sleeping dogs, it`s just English. I was just trying to give a description” he told Sammy Flex on Showbiz Daily on Thursday night live on Sammy Flex TV.

He added “Big man when we take a look at before and now, that is the comparison I was trying to do. Jupitar before and Jupitar now. I am trying to be honest. Jupitar before was something else. So if I didn’t include Jupitar in my list and I gave a reason for him being a sleeping dog, I think I’m being honest. Because I gave a reason why he is not on my list. Because he is not like the Jupitar before. The Jupitar I knew before was working harder than this. So if I use the word sleeping dog, it`s not a diss or me trying to discredit or disrespect someone. This is showbiz and we are entitled to use certain words and I don’t think people should have issues with it”.

He indicated that his idea behind the comment was to wake his colleagues up and to ask them to put in much effort into their work.

“This was about the dancehall fraternity and that is what I was talking about. I feel if they work harder our fraternity will also grow. I’m not a hater or trying to fight anybody. I was just trying to push my brothers to work extra harder” he added.

The names I mentioned were my favourites and Shatta Wale is not part of my favourites. I know there are people who listen to different stuff and I am not an exception. I also have that right to have my choice. So if today I say this is my list, tomorrow someone I didn’t mention today can be in my list tomorrow. It`s all about choices and choices differ. Choices change. This moment, Shatta Wale is not part of my list and it`s my opinion”.