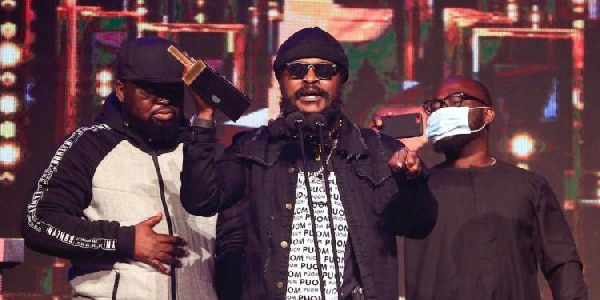 Ras Kuuku was spotted trending at #1 on Twitter and as an entertainment news hub sammyflextv.com, we delved into it to know the reason why he was trending and to our surprise we found out that the award he won at the just ended VGMAs is missing.

Ras Kuuku is a reggae/dancehall singer, he won this year’s reggae/dancehall artiste award at the 2020 VGMAs. Ras Kuuku also known as Puom in a long while and for so many years has never won any award in that category but was fortunate to win it this year.

Being his first time winning an award at the Vodafone Ghana Music Awards, he started touring with his trophy from one media house to the other to show appreciation to them for the love and support they showed him.

Recent news is that his award trophy has been stolen after his last tour but no details are out to confirm that yet. Some tweeps also think it’s just a prank to make him trend. Yet he is still being trolled on Twitter for being too excited and over celebrating for winning just one award.

In an interview with Sammy Flex, Ras Kuuku confirmed why he is embarking on a tour and the interview has been captured on Sammy Flex TV for your listening pleasure. Click the link below for that exclusive interview.