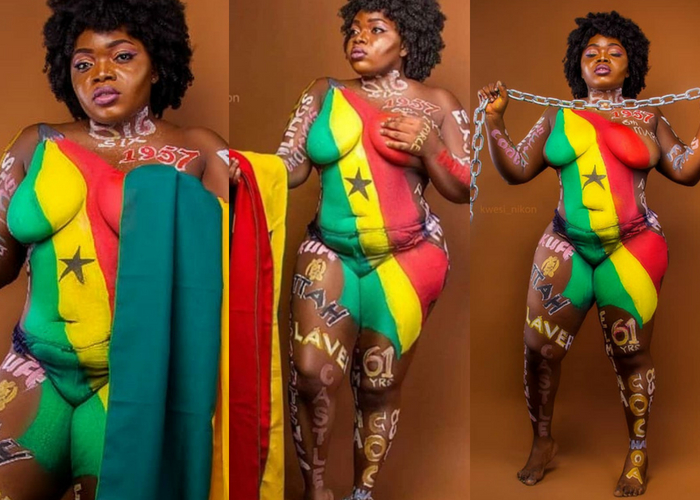 Accra FM’s most controversial presenter Nana Romeo has been accused by Afrobeat and dancehall singer Queen Haizel for “sex for music promo” that nearly made her quit doing music.

In an interview with Larry on Ryde With Larry Bozzlz on TV Africa, Queen Haizel said that has been her greatest challenge as a new artiste in the music scene and her experience with the broadcaster almost pushed her out of music.

“Something pushed me. I wanted to quit music and it`s about a radio presenter. After I decided to come back into the music scene, you know this industry is not just there like that. You need to go through the protocols. You need to pay your dues, do things in a particular way so you can get your works out there. You can’t just come into the industry and expect to blow if you don’t have the right measures to push you there” she revealed.

Haizel further disclosed: “For me I didn’t have all the facilities. I didn’t have money. I didn’t have the links. I didn’t have anything. Though I was making some small money from my egg business, that couldn’t take care of me in my music business. So it got to a time, I got this link with this lady I don’t want to mention her name now, who introduced this guy to me by name Isaac but later I realized he wasn’t Isaac. He wanted to take advantage of me. He wanted to use me all the time and pretend to be managing me. His name is Nana Romeo. Is it ‘Welewele’ or something something? Yeah”.

The singer narrating her experience with the presenter said, they started flirting in video calls and later decided to meet him after turning down his request to visit him at home.

“So we started doing video calls so I believed whatever he wanted to tell me. He told me he was going to help me to get out there. He will get my songs out there but I should come to his house and pay him a visit and stuff like that. But I’m like that, in my mind it is not everything you say that I will just follow you. So he was like you come. He was showing me things on Cam you know? I don’t want to say everything. He was showing me things on cam, I was showing him my thighs and stuff like that. I was basically trying to make him know that I was ready for this thing. Then it got to a time he said no he didn’t want me to do anything on cam. He wanted me to come to his house and I said no. Then he stopped talking to me for some time” she stated.

She added: “So it got to a point, I released a song and I’m like in this industry when you ‘beef’ someone at the end of the day you will still need the person. So even if I wasn’t able to give him what he asked for, at least let me go to him and plead with him. Let him know that this is the work I want to do so he should forget everything and let’s work. If even the work is progressing and he helps me to a point, I can easily give it to him without him even demanding for it”.

“So he was like when do you want to see me? And I told him. So the time he came around I was coming from the bathroom. He came to my house. God is my witness. This thing really hurts me till now. At that time, I had released my single “Yetwem” and wanted to connect with industry players to help me promote it. It was doing well in Central so I decided I had to connect with those in Accra to push the song. So he came to my room. Actually when the call came I was in the bathroom, so I rushed to put on my robe to meet him outside after he told me he had followed the live location to my house. So I brought him into my room and I was expecting him to make us talk about my song. But no, he didn’t want to talk about the song. He wanted to make out and I said no. At least let’s talk about the song. Let me at least feel like I’m doing my best to get my songs out there so you’re here to really help me and everything. And then he was like why am I being so difficult? I will never blow. Yeah he told me. He said if I’m going this way, I will never blow and I should mark it anywhere my song “Yetwem” will not get anywhere. Kobby is my witness. I cried that day when he left”.