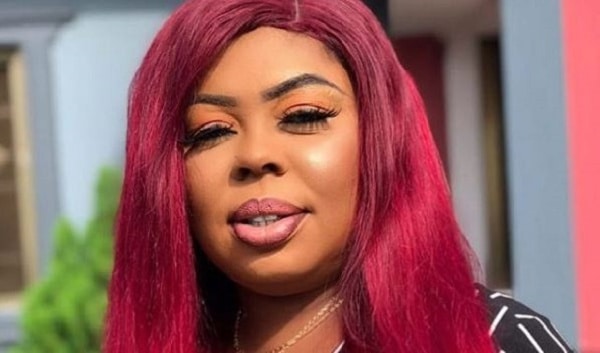 Afia Schwarzenegger who is a known and a staunch sympathizer of the opposition National Democratic Congress (NDC) party some few days ago came under heavy criticism and attacks from party fanatics when the controversial media personality sarcastically posted a photo of the party’s running mate, Prof. Jane Naana Opoku-Agyemang and captioned it “”makeup and hair on point”.

Party sympathizers flooded her Facebook page with insults which forced her to delete the post some few hours after it was published. Later in the next day, Afia Schwarzenegger posted a video to also rain insults on her attackers and the NDC party.

“I won’t support NDC again and it is not by force. I will use my ugly face to support Nana Addo and the NPP party. If you people claim I am hungry and ugly, then you people couldn’t take care of me. After fighting for you, i have been stabbed and you people couldn’t do anything for me. So take your money to Appiah Stadium to campaign for you. He is the one that can carry the head of your flagbearer and roam with it. I have taken my ugly face to NPP and they have received me. So what again? Why can’t you let me go with my ugly face? Why haven’t you read the Kwesi Botwey report? Are you not the same people that said you lost the 2016 election because of celebrities that campaigned for you? Now we are leaving too you want to attack me? I can’t come low to your level. I won’t do it again and it is not by force. I did not campaign for NPP but when they came to power, they have employed my blood brother to work at the flagstaff house. I never campaigned for them. I campaigned against the NPP government”.

“I campaigned for the NDC yet they have employed my brother. He feeds himself and feeds my mother as well. So if you have a problem with where I stand in this year’s elections, then pick a phone and call God. You didn’t create me. You are not the reason why I am famous. You can’t tell me what to choose. And for the love of God, I have only one vote. Go to school and learn common sense. It`s not by force. If I am ugly, I was uglier than this in 2016 yet I campaigned for you the NDC” she angrily said in the video.

Afia added: “Again if I decided to campaign for you with this same ugly face you would have worshipped me. So if I am hungry, honorable you are the reason why I am hungry. I have followed you for five years and I am hungry and decided to move on, is that a problem? If I am a hungry celebrity then it is NDC that has made me a hungry celebrity. When I wasn’t a member, I was working at Despite Group Of Companies and I was receiving Ghc10,000 every month. Fuck all of you. You want to bring yourselves? You are not enjoying my silence right? NDC, do you want to do it with me? I am respecting people that are talking to me. You understand? A lot of people with dignity are talking to me that is why I am quiet. You people are crazy. I said if I am hungry, I am hungry because of the NDC. Ain’t you ashamed? Ain’t you ashamed that the five years that I spent with you I’ve got nothing to boast for it? When you were giving out contracts to women did you give me some? When I wasn’t a member wasn’t I working? And you see, I don’t read comments so I don’t care about your insults. All I know is you are insulting yourselves and your foolishness. If you have money, go give it to Appiah Stadium. He is the one carrying the head of your flagbearer” she noted.

According to Afia, the party should dare not bring themselves else she will bring out every secret in their cobweb.

“Don’t bring yourselves. Do not. Those your stupid foot soldiers on my page I have not seen them. I said I used my ugly face to campaign for NDC and I don’t remember speaking against anybody. Someone did makeup, I saw it on TV and I said makeup on point. I did not insult her. Nobody can say makeup on point is an insult. But you people are bleeding because you lack common sense. If someone says makeup on point, it is not an insult but whom am I to talk about a bruise lion? Do you think I care about your insults? I took insults for your gad damn selves. I took injuries for your party. When Abrokwah circulated my nudity, Ghana ask, which NDC party member picked phone to call me? Are you mad? Do you think I came to this world for you? Do you want a platform to trade insults? Do you know the secrets in your cobweb? Bring your foolishness here. Let me put you to your place. I will say it again, NDC made me hungry. Because Despite gave me 3 billion to work for him. NDC you are the reason I lost my job. Fuck all of you. Bring yourselves here let me show you the one that is more foolish than you. Yes I am ugly and I was uglier than this. I did not become ugly today. When I followed you I was starving. I was so hungry. I was fighting all the foolish fights and the party was sharing money to some women. You bring yourselves and you will know. I will end it here. Dare bring yourselves again” she said.