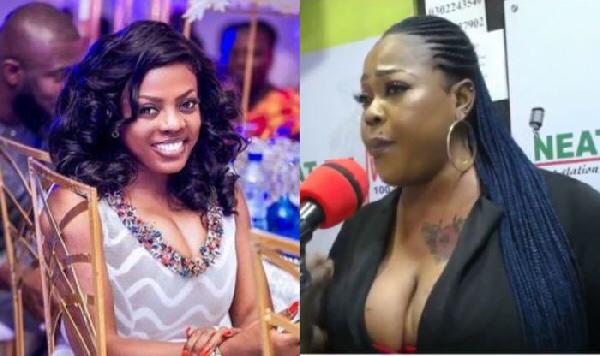 Trouble is looming from the camp of Despite Media after an interview with a notable personality in the entertainment space who prefers to be called a slay queen but with the moniker Queen Mona. When she appeared on Ola Michael`s Entertainment Ghana show on Neat FM, she made some deadly allegations on ubiquitous broadcaster Nana Aba Anamoah labeling her as a slay queen who pimps ladies to rich men for business.

Queen Mona detailed the modus operandi of these ladies including Sandra Ankobia, Serwaa Amihere and others discrediting them of their hard work in the media giving them successful lives. Three days after the interview, the official handle of Neat FM has released an apology to the people who were mentioned in the interview including another apology from the presenter Ola Michael on his facebook timeline. Reliable information from NYDJ also says, the media entity has deleted the video from their Youtube and online channels after issuing the apologies.

Industry folks are asking many questions as to whether the multiple apologies coming from these entities known to be tough and hard are as a result of an eminent law suits hitting them from the aforementioned people. At the moment, the people who were mentioned have not made any public statements yet concerning the issue but the apologies coming from the people are enough evidence that all is not well from the office and the host. www.sammyflextv.com is monitoring proceedings and will furnish readers with all the updates.

Read the apologies from Ola Michael and Neat FM below.