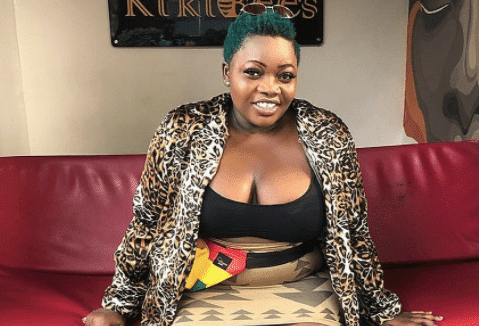 Queen Haizel has walked off a Hill TV live show in the middle of a discussion programme after a co panel member had called her a prostitute. The ‘Swappi’ star walked off the set and admitted she was offended live on air when such words were used at her.

The singer was part way through an appearance on the Hill TV programme, alongside one other male panel whose details were not captured in the viral video. Haizel was speaking when the other guest suddenly cut in using those words that got the singer offended: Haizel just got up and left. The host tried calling her back but she was so pissed and didn’t listen.

The studio went quiet as Haizel quickly exited and as the host went on to call her back to continue the chat. The other guest said: “let her leave, these are people that hate the truth”.

Looking bemused, the host told viewers she had to go on a commercial break. Later after the programme, the male guest whose name was given as Lisbon Odame GotNews shared this messages to his followers and viewers of the show:

“Disclaimer: I want to officially bring to the notices of the general public that on yesterday’s,Wednesday 7th October 2020 show on Hill_TV ,Night Call with Adu Safowaah Gh .I never and will never raised my voice on Queen Haizel Queen Haizel Wan nor disrespected women . I only made a truthful submission on the need for good marriage . Moreover ,I apologized live and even didn’t get angry when she left the show .

On that note the management, Sammy Flex Nation, fans of Queen and everyone should know I am a great fan too hence, we are cool and I support the brand 100 %.

Moreover, greater appreciation to The Man of God, my papa Prophet Nigel Gaisie, @Naa korlie and the whole management for having me on the show.