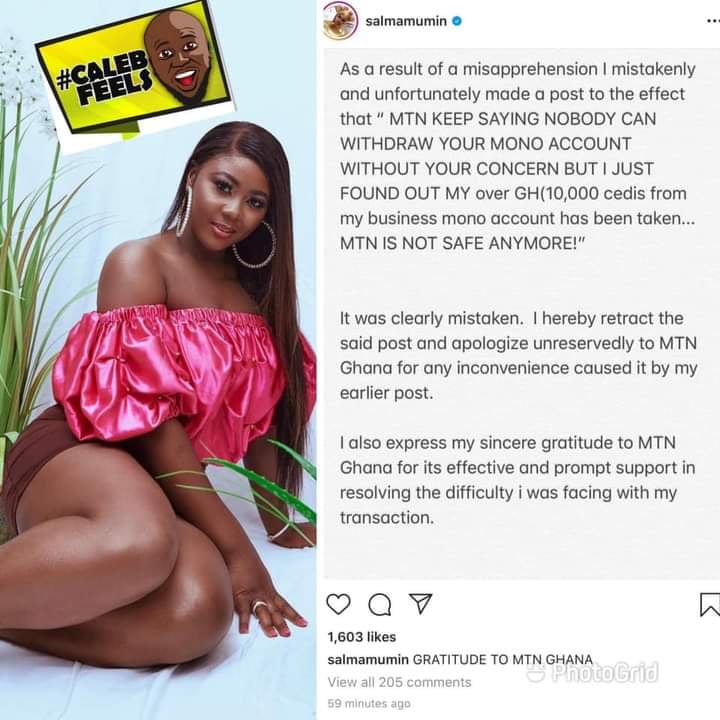 Ghanaian actress Salma Mumin seems very remorseful after accusing telecomunication giants, MTN Ghana of mobile money theft in a post on Thursday evening. The actress as demanded in a statement by the company yesterday has rendered an unqualified apology over earlier claims of thievery.

She described her ealier claims against the company as an act of misapprehension and really regrets it.

The actress has retracted her earlier statement and also expressed her sincere gratitude to MTN Ghana for its effective and prompt support in resolving the difficulty she was facing with her transaction.

“As a result of a misapprehension, I mistakenly and unfortunately made a post to the effect that MTN KEEP SAYING NOBODY CAN WITHDRAW YOUR MONO ACCOUNT WITHOUT YOUR CONCERN BUT I JUST FOUND OUT MY over Ghc10,000 from my business mono account has been taken… MTN IS NOT SAFE ANYMORE!” It was clearly mistaken. I hereby retract the said post and apologize unreservedly to MTN Ghana for any inconvenience caused it by my earlier post. I also express my sincere gratitude to MTN Ghana for its effective and prompt support in resolving the difficulty I was facing with my transaction” she said in a post on her IG page on October 24.

Salma Mumin earlier in the week took to her Instagram page to accuse the telecommunications company and its staff of stealing her money worth GHC10,000 from her business mobile money account.

But a statement by the company yesterday refuted the claims and demanded that the actress retracts and apologises within 24 hours.