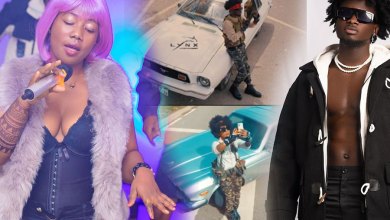 2020 VGMA artiste Of the year, Kuami Eugene has been accused again of song theft. It is not the first time, the second or third time and it seems that chapter of his career is never going to be closed.

Bhadext Cona alleges Kuami Eugene stole her “Bolga” song, spiced it up a bit, called it “Bunker” and released it.

“I performed Bolga at Jaycom Hotel in Bolgatanga on 31st December 2020 and on January 2021” she disclosed in an exclusive interview with Sammy Flex.

According to her, she requested for a feature through one guy by name EL who works with Bryt TV and that was how the “Bolga” song got to Kuami Eugene.

“Three months ago I requested for a feature from Kuami Eugene but as an up and coming artist that knew nobody in the industry, I went through one man who claimed he had a relationship with Kuami Eugene to assist me.

So he asked me to send him (El) my song. I sent three songs. First song he told me Kuami Eugene claimed the song sounded childish and that he doesn’t like it”.

She continued: “So I sent another song which is “Bolga” and he came back to tell me that Kuami said the beat is archaic. He also said that Kuami said the rhythm has been in the industry for long and people are doing the same thing so I should be creative and do something new. So I sent a third song and again he insisted I’m not been creative. I listened to his criticisms and decided to go back, learn and get back to them and that was all. This conversation is just exactly three months ago. The first day I heard Kuami’s Bunker song, I heard my song”.

Speaking on the Real Talk show on Sammy Flex TV, she revealed Kuami Eugene initially asked her to pay Ghc10,000 for the feature which she couldn’t afford at that time.

“Personally I like Kuami as an artist and stream his songs a lot. I was pained when I heard the song. Already people love the song and asked that I pushed it. Until I heard the song, I was still learning to get the song better to get him on it only to hear him drop Bunker” she noted.

Cona added: “I shot the video of the song exactly a week ago. I just sat with my team and the video director to plan the concept. So we just put ideas together and shot it”.

According to her, she was communicating through EL and never met Kumai Eugene so if EL was not engaging Kuami on her behalf then he should come out and deny it.

When asked why she didn’t share the video after her performance in December 2020, Cona explained that she had plans of putting an established artist on the song to help elevate her brand and wasn’t in a hurry to make the song public by publishing the performance video.

“I didn’t want to make the song known to the public. I wanted to do that after I’ve gotten the established artist on it. I only performed it on that night because the show was in Bolga and the song is for Bolga” she said.